Why Does My Cat Drag Things Into the Litter Box? Most people who own cats can agree that cats are strange creatures with minds of their own. Some cats seem to change their moods at the flip of a dime while other cats might remain mellow throughout their lives. No matter what the temperament of your cat is, there will always be a few behaviors that it does that may seem strange. One of the stranger behaviors you might see your cat doing is when it drags items into its own litter box with it. After all, for people, that would be the equivalent of simply bringing a piece of paper and dropping it into the toilet.

If you see your cat doing that, you may begin to wonder what it is doing or why it has decided to do this. There are a few different reasons why cats may decide to bring things into their own litter boxes. Some cats, particularly cats who are adamant about grooming and cleaning themselves, will do this to help them better cover up the stench of the litter box. Other cats may do it because they consider the litter box to be a “safe” place and they want to bring their belongings into the box.

In order to figure out why your cat is doing this, you are going to want to make sure that you look at a few different factors first. You will want to consider what your cat is bringing into the litter box as there is a difference between bringing a beloved toy and bringing scraps of paper it found. You will want to see what the cat does with it, such as simply keeping it there or in front of the litter box, or using it to actively bury its droppings. And you will need to factor in your own cat’s personality, such as whether your cat is particularly clean and hygienic or whether your cat tends to find small places to hide in when it is scared. These will all make a difference in determining why your cat is bringing things to its litter box.

Understanding What the Litter Box Means to the Cat

Another factor that you will need to think about is going to be how your cat feels about its litter box. For some cats, the litter box is nothing more than the right place to relieve itself. For most other cats, especially in multi-cat households, the litter box is a safe space. It is an area that smells of your cat and by extension, can be considered your cat’s personal space that it needs to “protect” from threats in the house, such as another cat. On this note, it is important to consider that litter boxes utilize many of the cat’s own instincts to create a place where your cat will actively want to relive itself.

Litter boxes are good for burying droppings and they are good for marking one’s scent and territory. Litter boxes tend to be safe and out of the way, making it a good “home” for cats who may be more fearful than others. In multi-cat households, the aspect of territory is emphasized. This is important to note because when your cat brings things to its litter box, it is also acting on its instincts rather than out of seemingly no reason.

What Does the Cat Bring to the Litter Box?

What your cat brings to its litter box is important in determining why your cat is doing it. Take a cat’s own toys, for example. While it might seem baffling why your cat may want to bury its toys in its litter, you need to think back towards the cat’s instincts. Most cat toys are meant to focus on a cat’s predatorial and hunting instincts. This is why cats tend to kick, toss, and throw the toy around as they play with it so that they can simulate “hunting” prey.

Likewise, when a cat is done with its “hunt,” it will want to bring its trophy back to a safe home. In the context of your house, there would be no better place for this than your cat’s litter box, as it smells of the cat so it would naturally mark the “hunted prey” as its own. For some cats, bringing the toy to the litter box is simply part of the play, as strange as it may seem. In a multi-cat household, there is also the idea of marking prey or toys as the cat’s belongings and burying them to prevent the other cats from stealing that cat’s “capture.”

Therefore, when a cat brings a toy to its litter box, it may very well just be out of the cat’s desire to play and simulate a hunt, with some twinges of marking ownership of the toy mixed in. This is a habit that cats may grow out of, though there isn’t much you can do other than removing the toy to discourage cats from doing this when they play.

Sometimes if a cat uses a piece of your clothing to bury its droppings, it could be doing it out of a sense of protection. As strange as it sounds, if your cat buries a shirt that you like to wear, it may just be out of love. To cats, humans are defenseless and incapable. That’s one of the reasons why cats will present you with dead animals as a gift; that is their way of providing for you since your cat may believe that you are incapable of hunting. In this same line of thinking, your cat may be trying to “protect” you by hiding clothes with a strong scent of you in an area that is filled heavily with your cat’s scent, such as the litter box.

And finally, if your cat is using scraps of trash to bury its litter, it could be because there isn’t enough litter in the box to cover up the cat’s scent. Cats do not like the smell of their own droppings, which is why they bury them in the first place. If there isn’t enough litter to bury those droppings or the scent is too strong, the cat may try to find other materials to bury with. In this case, you may want to try to provide more litter for the cat’s box or you may want to clean the box out more often. How to Teach a Stray Cat to Use a Litter Box? 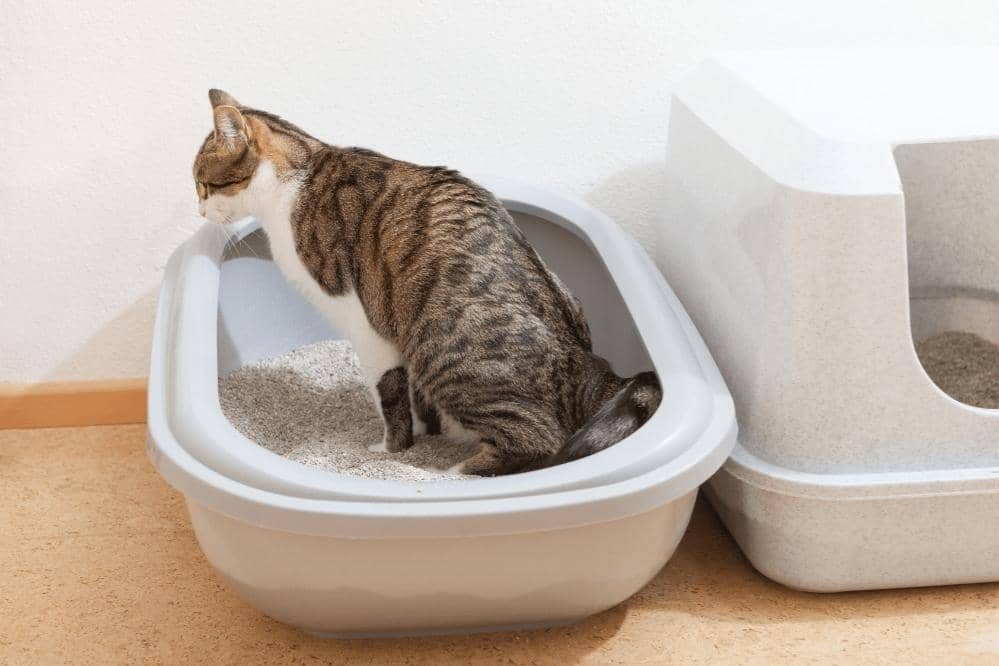 How Do I Get My Cat to Use the Litter Box After Moving?